’The mirror reveals, focuses our attention on ourselves, or our place in the world. In many cases it distorts the picture or can blind you, but somehow it leads us back to reality. This metaphor was the staring point for our workshop.’ 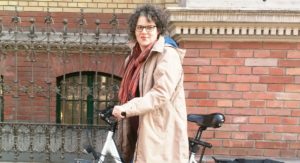 Dóra is a devotee of happiness – she does what she loves: she’s been teaching since 1999, rides a bike, reads, goes to the theatre and cinema, engages in conversation with interesting people, sings in two choirs, visits exhibitions and museums, plays board games with her big family. She participates in school life as a classroom teacher and she is also active in organising community events. Her main projects include ‘window on the world’ vocational day and coordinating collaboration with OFF-Biennale: her school facilitated Kerezsi Nemere’s ‘Portable Museum of Intermediate Spaces’ and the students could participate in Manel Pelmuş’ actions series in public space called ‘Sketches of a Monument’. She prepares performances for the school ball with her colleagues and students. She also experiences the happiness of volunteering at the Hungarian Charity Service of the Order of Malta: her team worked in hospices for the elderly and took them on holidays for a period of ten years. She joined DemoLab enthusiastically and is working towards every participant-including her- becoming more and more problem-sensitive, solution-minded and efficient. To see the world in more colours, sensitive to light, but not afraid of the dark. To be able to plan and respond, but live in the moment. Dóra’s own utopia is that in the project the individual(ity) and the community could live together in effective and productive harmony. 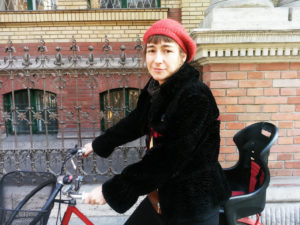 Sarah Günther is a Budapest-based performance artist and -thinker. She creates experimentaltheatre as a common space, using art to play around and break through the constraints of livingconditions, preparing ourselves for a potential different society to come. Sarah’s trans-disciplinarypractice builds up on her Diploma in Applied Theatre Studies (Gießen, 2011) under HeinerGoebbels, Bojana Kunst or Rabih Mroué, as well as on her Studies of Romanistik, Sociology andPsychology (Heidelberg). 2007/08, she attended the directing class of the SZFE Budapest. In 2017,she took a class in Dramapedagogy. She co-founded the Budapest artists coop. Pneuma Szöv. in2008, where she has mostly worked as an artistic director, researcher and performer ever since.Pneuma Szöv. melds artistic research, social philosophy and urban studies with various forms ofvisual art, community and public art, free pedagogy concepts, activism and low-threshold socialtherapy. From their Giant Squirrel project they inherited also the nickname “Mókusok”. Her project„20-Forint-Operetta“ won the first prize of „kultur-im-dialog.moe 2012″. Their works like “AirFactory”, “EXIT POLLoska” or “Paplament” were shown at OFF-Biennale Budapest, WienerFestwochen or Kampnagel Theatre Hamburg. She is co-founder of the performance collectiveMobile Albania, dealing with translocal forms of organization beyond the space-time-logic ofcapitalism. Between 2007 and 2010 she performed for the Berlin collective andcompany&Co withshows e.g. in HAU Berlin or Tmuna Theatre Tel Aviv. Currently she is on tour with the all-femaleshow “Queendom” (premiered in MU-Theater) and dealing with questions of freedom as part of themultimedia duo “Marie&Mari” (e.g. ROM Festival Budapest, Tårnby Torv Festival). Besides sheworks as a journalist, writer, translator and a free pedagogue in institutions and free contexts.